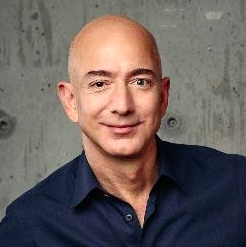 Forbes, an American magazine, comes out with a list of the world’s billionaires (in US dollars). The richest person in the world this year is Jeff Bezos, the American who is the CEO of Amazon (image). He made US$39 billion in just this last one year, bringing his total worth to US$112 billion. He is the first person in the Forbes list to ever cross into the 12-digit mark. Forbes calls these billionaires “The Three-Comma Club” as three commas are used to represent their fortunes. Bill Gates, an American who co-founded the software company Microsoft and runs the Bill & Melinda Gates Foundation, is in the number 2 spot with US$90 billion. Gates had held the top spot for 18 of the past 24 years. Warren Buffett, the American CEO of Berkshire Hathaway, holds the third place with US$84 billion.

Amazon was founded in Seattle in 1994 by Bezos. The company started off as an online bookstore. As Amazon’s logo portrays, the company now sells everything from A to Z. Bezos also started the aerospace company Blue Origin, and owns the American daily newspaper The Washington Post.

Here is a video about Bezos.