German Chancellor Angela Merkel’s political party has won the most votes (about 33 percent of the votes) in Germany’s general elections. This means that she’ll be Chancellor of Germany for a fourth term. However, her party didn’t win enough votes to govern alone. She will need to work with some of the other political parties to form a government. The German Chancellor is the country’s head of government.

Merkel has been the Chancellor since 2005. She is 63-years old, and had worked as a scientist before she got into politics. Forbes, an American magazine, listed her as the “world’s most powerful woman”, and as the “world’s third most powerful person” in 2016. She even has a barbie doll modeled after her. She is often seen with her hands in front of her with the fingertips touching. The hand gesture has been given the name of “Merkel-Raute” (or Merkel diamond), and is represented by the emoticon <>.

Germany is famous for its castles, cars, cuckoo clocks, composers, fairy tales, black forest cake, and much more! It has given the world some of the most famous automobile brands – BMW, Mercedes Benz, Audi, and Volkswagen. Famous composers – Johann Sebastian Bach, Ludwig van Beethoven, and Johannes Brahms – were all born in Germany. Albert Einstein, one of the world’s greatest scientists, was also born in Germany. You’ve probably heard of Snow White, Sleeping Beauty, Cinderella, and Hansel and Gretel. The Brothers Grimm wrote all these fairy tales, after hearing stories from different people. 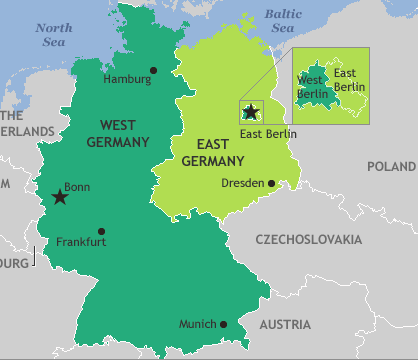 After World War II, Germany had split into two countries, German Democratic Republic (East Germany) and Federal Republic of Germany (West Germany). Even the city of Berlin was split between the two new nations. East and West Germany became one nation again in 1990, 41 years after their separation.

Here is a video about Merkel, and another about the Barbie doll modeled after her.

An unexploded bomb left over from World War II was discovered in Frankfurt, Germany. About 60,000 people were evacuated so that the experts could safely defuse the bomb on September 3 this year.

The gummy bear candy was invented in Germany by Hans Riegel Sr. in 1922.