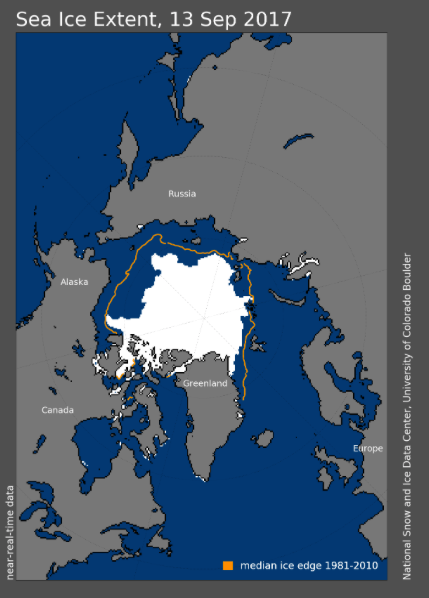 On September 13, the Arctic sea ice coverage appeared to have hit its lowest for the year. This was the eighth lowest ice cover ever recorded. The lowest was in 2012. The Arctic sea ice floats in the water body around the North Pole region. The size of the coverage has been recorded by scientists since 1979. The ice cover melts and decreases in the summer months, and it refreezes and increases in the winter months. Usually, the largest sea ice cover over the Arctic is in the month of March, and the lowest is in the month of September.

The Arctic sea ice is very important. It acts like our planet’s air conditioner and helps control Earth’s climate. The sea ice reflects a large percentage of sunlight that reaches the ice back into space. The ocean surface without the ice cover would absorb a lot of the sunlight, which in turn would make the water warmer, and melt more ice.

Here is an animation showing the daily Arctic sea ice from March to September of this year.