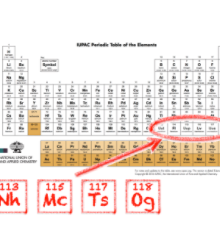 Trying to memorize the periodic table? Well, your job is going to get a bit harder! Element numbers 113, 115, 117, and 118 have officially been given names. They are Nihonium (Nh), Moscovium (Mc), Tennessine (Ts), and Oganesson (Og), respectively.

The periodic table is an organized list of chemical elements according to certain characteristics the elements have. Here are two videos. The first is a song called “The Elements”. The other is Harry Potter star Daniel Radcliffe singing The Elements.