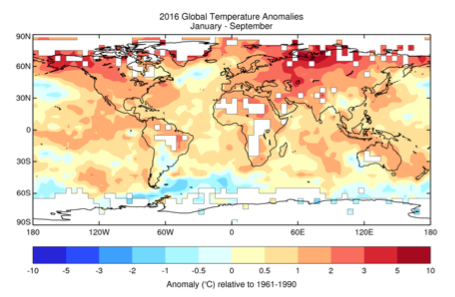 If you feel this year is hot, you are not the only one. According to the World Meteorological Organization (WMO), 2016 is most likely on its way to be the hottest year ever recorded (record keeping started in 1880). This is based on temperature readings from January to September. The global temperatures over these months have been approximately 0.88°C (1.58°F) higher than the average for the years 1961-1990, a reference period which is used as a baseline by the WMO. The previous hottest year was 2015. The 15 of the 16 warmest years that have ever been recorded have all occurred since 2001 (1998 was the other one). Here is a video about this story.