Australia has been on the move. It was recently announced that in the past 22 years, the continent has drifted north by about 1.5m (5 feet). Australia is often called “the land down under” because it lies entirely in the Southern Hemisphere and appears low down on globes and in maps. So maybe we’ll soon have to call it “the land not-so-down-under”. 🙂

Scientists believe that the Earth’s surface consists of a hard shell called the crust, which is broken into large pieces called plates. Continents and oceans lie on top of these plates. Below these plates is very hot liquid rock called magma. The plates are floating on top of this magma and are constantly moving at very slow speeds (around 5 to 10 cm a year). The Australian plate is the fastest moving continental plate on Earth. 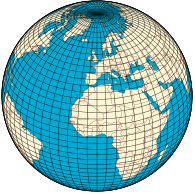 Some of the gadgets and technology we use (such as self-driving vehicles and drones) need precise location information. The government of Australia is in the process of fixing the country’s local coordinate system so that maps show Australia in the right place.

Here is a video that explains this news story.
Image Credits: Hellerick for the globe’s image
Sources: http://www.news.com.au/, http://www.abc.net.au, http://www.ga.gov.au