According to the Potsdam Institute for Climate Impact Research, our global sea levels are rising at a fast pace. If we don’t change our ways, sea levels could rise by up to 130 cm (4 feet) by the year 2100. There was little change in the sea levels in the period from AD 0 until 1880. From 1880 to 2009, the sea levels rose by approximately 21 cm (0.7 feet). Sea levels rising is caused by two main factors. One is that water expands as it gets warmer. The other is that warmer temperatures cause the ice on land (such as glaciers) to melt and add more water to the seas. 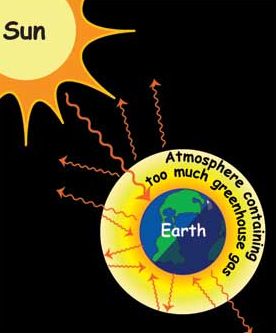 The Earth has gotten warmer over the last 100 years. This could be something that the Earth is naturally doing, but many scientists believe that the Earth is warmer because of an increase in greenhouse gases created by some of our activities. Carbon dioxide and a few other gases such as methane, ozone, and nitrous oxide are called greenhouse gases because they help create something called “the greenhouse effect”. This is what keeps the Earth warm; without these gases, our planet would have been much cooler. However, human activity has now driven up the production of these gases. For example, when our car runs on petrol, it is producing carbon dioxide. When our computer runs at home, it needs electricity, which we get from a power plant. Many of the power plants burn fossil fuels, and that in turn produces more carbon dioxide. The increase in greenhouse gases is making our planet warmer than its usual state, causing global warming. 2015 was the hottest year ever recorded (record keeping started in 1880). 15 of the 16 warmest years that have ever been recorded have all occurred since 2001. Here are two videos about climate change and temperature changes.

Here is New York Times’ interactive chart with temperature information for over 3,000 cities from around the globe for 2015.

Here is a little snippet from the American actor Leonardo DiCaprio’s acceptance speech at this year’s Oscars: “Climate change is real, it is happening right now. It is the most urgent threat facing our entire species, and we need to work collectively together and stop procrastinating. … Let us not take this planet for granted.”