China has finished construction and started the operation of two lighthouses on the Spratly Islands (also known as Nansha Islands) in South China Sea. The problem is that portions of the Spratly Islands are also claimed by Malaysia, the Philippines, and Vietnam.  In recent times, China has also built military airstrips on these islands, upsetting the other nations that lay claim to them.

There are other island groups in the area with ownership disputes. The Paracel Islands in the South China Sea are claimed by both China and Vietnam. The Senkaku Islands (also known as Diaoyu Islands) in the East China Sea are claimed by China and Japan. There is Taiwan which wants to be a separate country but is owned by China. Not only that, Taiwan also claims Senkaku Islands to be its property. 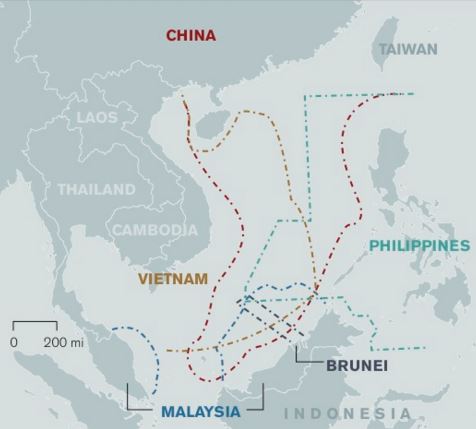 In the South China Sea, the fight isn’t over just the islands. It is also about the water body. China, the Philippines, Brunei, Malaysia, and Vietnam all border the South China Sea and have overlapping areas of the water body they claim as their own. There is a reason that there is a fight for the islands. The waters around the islands are great for fishing, and could have oil and gas. They are also a major shipping zone.

Fighting about the water was bad enough, but there is even a dispute about the name of the water body. The Philippines wants part of the South China Sea to be named the West Philippine Sea.

Folks on a Beijing highway in China were recently stuck in an awful traffic jam on their way home after a national holiday. Here is a video.