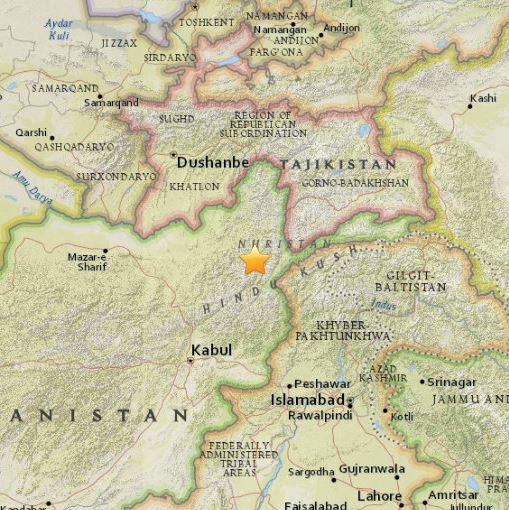 A massive earthquake struck northeastern Afghanistan on October 26. It had a magnitude of 7.5 on the Richter scale, and was large enough to be felt in the neighboring countries of Pakistan, India, China, and Tajikistan. More than 300 people have died, and more have been injured. Ten years ago, an earthquake of similar magnitude (7.6) had struck about 300 km (180 miles) away from this earthquake causing over 80,000 deaths. It was a devastating earthquake. One of the differences between the two earthquakes was the depth at which they occurred. The depth of the October 26th earthquake was over 200km (125 miles), while the 2005 earthquake was 26 km (16 miles) deep.

The magnitude of an earthquake is measured on the Richter scale, and is determined by how much the earth shakes. The most deadly earthquake recorded since 1900 was the one in 2010 in Haiti that killed over 300,000 people.

Here is a video about how earthquakes are measured.

There has been unrest in Afghanistan for many years now. In 1979, Soviet Union (a country that later split into Russia and 14 other countries) attacked Afghanistan and took over the nation. The Soviets left Afghanistan nearly 10 years later in 1989. After they pulled out, fighting broke out amongst various Afghan groups to claim a leadership role. In 1996, a group called the Taliban took over a large part of the country and brought an end to the fighting. They also enforced some very strict rules – women were not allowed to work outside the house, girls could not be educated, women had to be covered from head to toe in public, men had to have beards, and no one could watch movies or listen to music. People who did not follow the rules were punished harshly.