A new species that we humans are related to has been identified. This species is being called Homo naledi. Over 1,500 fossil elements were discovered in a cave near Johannesburg, South Africa. The fossils belong to at least 15 individuals of various ages of Homo naledi.  After trying to analyze different scenarios of how so many fossils of a species could end up in a chamber of a cave, researchers came to the conclusion that this species placed the bodies of its dead there. Until now, scientists believed that the only known animal that has deposited the remains of its dead was the Homo sapiens (that is us humans). The fossils have not been dated yet. You can watch a video here. 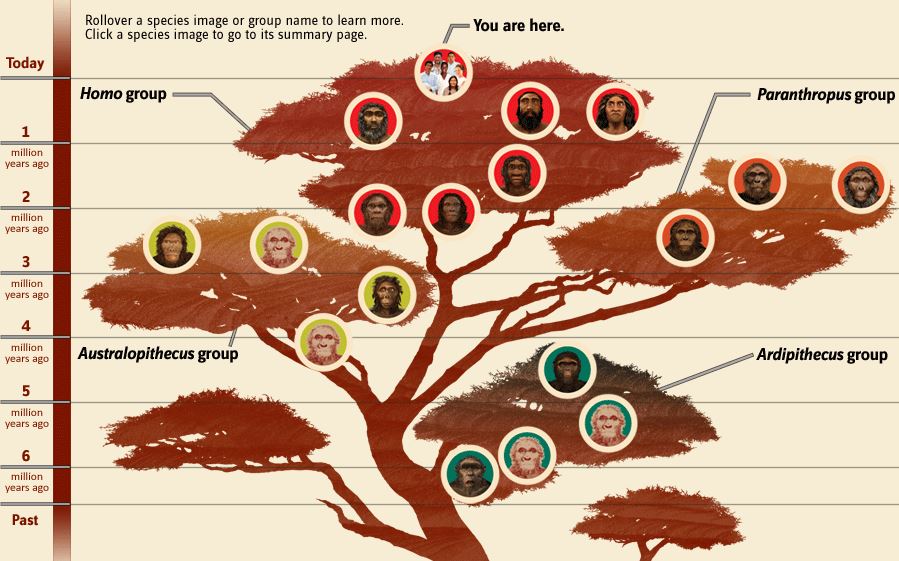 Going back in time, chimpanzees, bonobos, and humans have all evolved from the same ancestors over 8 million years ago. Over time, these species separated. The hominins are the human ancestors and their relatives after they split from the rest of the apes which was around 6 to 7 million years ago. After the split, our ancestors started to learn how to walk on two feet, and by about 4 million years ago, they became 2- legged animals. Around 2.5 million years ago, they figured out how to make simple stone tools. Their bodies started looking more like ours. Their brains grew in size. A major discovery after that was being able to control fire which happened around a million years ago. We humans (Homo sapiens) showed up around 200,000 years ago and are still going strong. Here is an interactive timeline showing human evolution. You can click through National Geographic’s Hominin History here.