The Embassy of the United States has recently reopened in Havana, the capital of Cuba, and the Cuban Embassy has reopened in Washington DC, the capital of the United States. Both embassies were shut down 54 years ago when the United States broke off its ties with Cuba. In April, the presidents of both countries (President Barack Obama of the U.S. and President Raúl Castro of Cuba) met to start direct conversations between the two nations. Not all the differences between the two have been resolved, but they have started discussing issues and have opened their embassies.

Cuba and the United States are separated by just about a hundred miles (160 km). In 1959, a man called Fidel Castro (image) became the leader of Cuba. The government of Cuba took over many industries and companies in the nation, including some that were owned by folks in the United States. Cuba also became friendly and increased its trade with the Soviet Union, a nation the U.S. did not get along with. Cuba and the United States’ relationship worsened and the U.S. broke off diplomatic ties with Cuba in 1961. In 1961 and 1962, the United States even tried to overthrow Castro from power in Cuba, but did not succeed. In 1962, the U.S. government realized that the Soviet Union was building missile bases in Cuba. This tremendously upset the U.S.. Eventually, the U.S. and Soviet leaders struck a deal, after which the Soviet Union removed its missiles from Cuba, and the U.S. removed its missiles from Turkey. The U.S. government placed trade restrictions with Cuba, which hurt the Cuban economy. Now, both countries are making an effort to become friends. 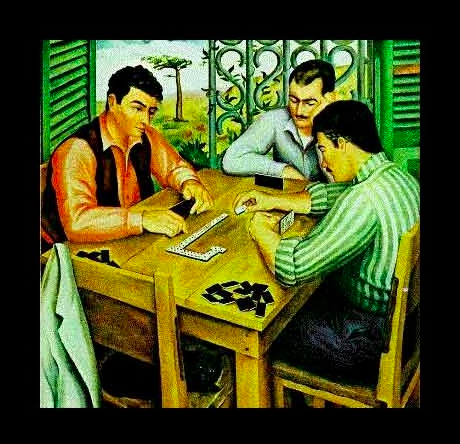 Cuba is an island nation in the Caribbean Sea. Christopher Columbus arrived in Cuba in 1492, and claimed it as a Spanish territory. The U.S. helped Cubans get their independence from Spain in 1898. Cuba became a part of the U.S. for a brief time, and became an independent nation in 1902. The country is famous for its cigars. A game Cubans love to play is dominoes. Many people gather and set up tables on the street to play the game. The image is of a painting called “Domino Players“ by the famous Cuban artist Jorge Arche.

Here is a video about the U.S. and Cuba’s relationship and another video about Fidel Castro.