The Central Japan Railway has set a world record for the fastest train. The train reached a speed of 603 km/h (374 miles/h) on a test run. That’s fast! The train is being developed to service between the cities of Nagoya and Tokyo, the country’s capital, in the year 2027. The train uses a technology known as magnetic levitation or maglev. Electrically charged magnets are used to lift the train off the ground, and to push the train along. The train floats in the air. Therefore, there is a whole lot less friction and the train is able to go much faster. China’s Shanghai Maglev (image) is the fastest currently operating train. It runs around 430 km/h (268 m/h). 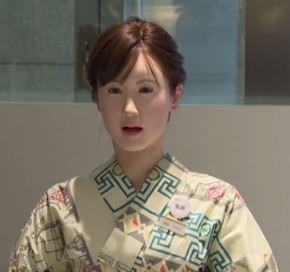 Japan has been in the news for another event. Aiko Chihira (image) started work as a receptionist at a department store in Tokyo. That’s great, but what is the big news? Chihira is a humanoid robot (looks like a human being). She speaks Japanese and can communicate using sign language. She was built by the Japanese company Toshiba.