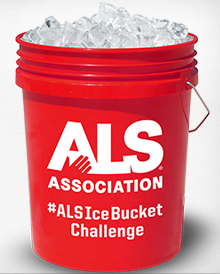 Seen videos posted by people pouring water with ice over themselves? Earthlings aren’t trying to find ways to cool themselves down. It’s the Ice Bucket Challenge. The deal is that once you are challenged, you either pour icy water on yourself or you donate a hundred dollars to the non-profit organization ALS Association. The Challenge was started to raise money for the organization. In just a month, over US$100 million has been raised. (For comparison, last year in the same time frame, US$2.8 million was raised.) The money will be used to support further research for the disease called amyotrophic lateral sclerosis (ALS), also known as Lou Gehrig’s Disease. There is no known cure for ALS. The disease affects nerve cells in the brain and the spinal cord. Patients with the disease end up losing control over muscle movement.