A group called the Islamic State (IS) has been taking over parts of eastern Syria and northern and western Iraq. The Iraqi troops and the Syrian army have been fighting the IS. American troops have also been helping the Iraqi military with some air support.

The aim of the IS is to establish a state for Muslim people where Islamic law is followed. The IS was until recently known as ISIS. The group’s leader is Abu Bakr al-Baghdadi and he calls himself a spiritual leader of the Muslim people. The IS came out of another group in Iraq. In the last couple of years, it has become more powerful. It is well-funded. People from around the world have gone to Syria and Iraq to join and fight with the group. The IS is known for being strict, harsh, and brutal. The group has killed many people, including many Muslims who don’t agree with its philosophy.

There has been a civil war going on in Syria since 2011. Syrians want their president, Bashar al-Assad (image), to step down. He has been the president for over 14 years. Rebel groups formed and started fighting Assad’s troops in 2011 to bring down his government. Fighting still continues on in the country. However, the IS also started fighting against Assad’s regime. Not all rebel groups agree with the ways of the IS, and they don’t want the IS to take over.

Meanwhile, Iraq itself has gone through a war in recent times. In 2003, Iraq was invaded by troops from various countries including the United States and United Kingdom. Iraq was attacked mainly because the country was thought to have weapons that could be used to cause destruction around the globe. These weapons were never found. Iraq’s leader before the war was a man called Saddam Hussein (image). He had been its leader for almost 25 years. After the war started, he was captured and tried in the Iraqi court. He was found guilty of killing many Iraqis and was executed in 2006. A new government was formed in Iraq. American troops stayed on in the country till the end of 2011 to advise and help the Iraqi soldiers and the newly formed government. 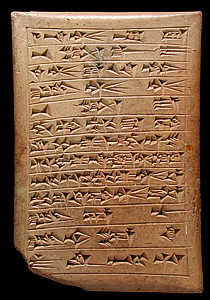 The two main rivers of Iraq are the Tigris and the Euphrates. The region between these two rivers was once called “Mesopotamia”. It is referred to by many as the “cradle of civilization” since the world’s first civilized societies began here over 6,000 years ago. One of the first wheels and writing systems (called cuneiform, image) is believed to have been developed in Mesopotamia. One of the world’s first written stories was about “Gilgamesh”. He is thought to have been a king of this area around 4,500 years ago. Some of Syria’s cities are also considered to be very old. Its capital, Damascus, is one of the oldest continuously inhabited settlements in the world – over four thousand years old. Here are three videos about Mesopotamia.

“Ali Baba and the Forty Thieves” is a story based in Baghdad, the capital of Iraq.