Turkmens will have to start paying for their gasoline starting July 1. Since 2008, the government has been supplying car owners with 120 litres (32 gallons) of free petrol every month. The government announced that this will stop. However, it is expected that the citizens of Turkmenistan will continue to get free natural gas, water, and electricity. 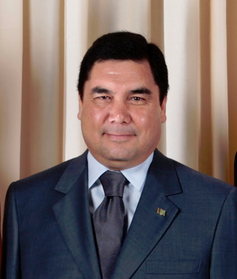 Turkmenistan used to be part of a country called the Soviet Union, and gained its independence in 1991. Saparmurat Niyazov was the first president of the country, followed by Gurbanguly Berdymukhamedov (image), the current president. Niyazov had made some strange rules in the country. He made his birthday a national holiday. A book written by him was mandatory reading for all students in schools. He renamed some of the month and weekday names. For example, January was named after him, and April was named after his mother. The opera and ballet were not allowed to perform. Young men could not keep beards or long hair. It was against the law to listen to the radio in the car. There was an annual national holiday for celebrating the muskmelon, a relative of the watermelon. His government had promised free natural gas, power, and water to every citizen through 2030.

After Berdymukhamedov took over in 2007, he made changes to some of Niyazov’s rules. For example, Niyazov’s birthday is not a national holiday anymore. The names of months and weekdays are now back to their original names. The opera was allowed to perform. A certain amount of gasoline was provided for free to Turkmens. Over 80% of Turkmenistan is made up of a desert called Garagum. The country is rich in natural gas, an important energy source. The official language of the country is Turkmen and its capital is Ashgabat. Nearly 90% of the people in the country follow the religion of Islam. The flag of Turkmenistan is one of the world’s most intricate national flags. On the left side of the flag, there are five patterns (called guls) used in designing traditional carpets that the country is famous for. The Akhal-Teke horse is a national symbol. The horse breed originated in Turkmenistan, and the horses have a reputation for being courageous.