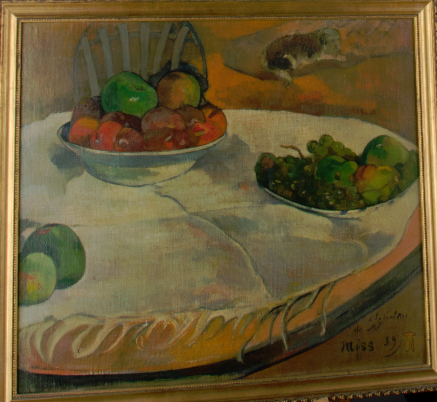 This news story sounds like it is out of a story book. An Italian factory worker went to an auction in 1975 and spent about US$30 to buy a couple of paintings. The auction was done by an Italian railways department for stuff people forgot on trains. Well, 40 years go by, and somebody tells the man that his paintings might be worth tons of money. The man gets in touch with the police. Lo-and-behold, the two paintings were stolen from somebody’s home in London, United Kingdom in 1970, and left on a train from Paris, France to Turin, Italy. These paintings were no ordinary art. They were painted by famous French artists. One was Paul Gauguin’s “Fruits on a Table or Still Life with a Small Dog” (image), and the other was Pierre Bonnard’s “Woman With Two Armchairs”. The two paintings are worth a few million dollars.