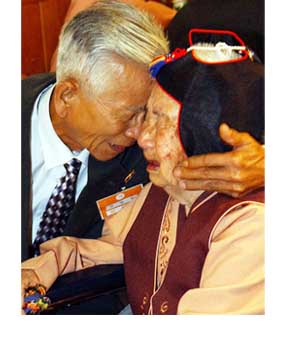 About 80 South Koreans are meeting some of their North Korean family members after over 60 years. Many of them are quite old. If they were 20 years old the last time they met, they’d be over 80 now. North and South Korea were part of a single country called Korea, until 1948, when it split into two nations. This was followed by a war (1950 to 1953) between the two nations. After the war ended, the border between North and South Korea became the most guarded border in the world. Families that were split up weren’t allowed to meet, exchange letters, or have any communication. The North Korean government very strictly controls many aspects of its citizens’ lives. It is very difficult to visit North Korea or for its citizens to leave. The governments of the two nations started holding reunions for separated families to meet face-to-face in 2000. However, the two nations had a tiff, and the last reunion was held in 2010.