A couple of colorful celebrations took place on March 17th. Holi, a Hindu religious festival, was celebrated. Holi usually falls in the months of February or March (in the Gregorian calendar which is followed by most western countries). Its date is based on the Hindu calendar. Holi celebrates a story about a Hindu prince, and the story symbolises the victory of good over evil. The festival is marked with people throwing colored powders and colored water at each other. It is also known as the “Festival of Colors”. As people plaster each other with color, a popular Hindi saying is “bura na mano, Holi hai”, which means “don’t feel offended, it’s Holi”. Hindi is one of the languages of the country India. Out of about a billion Hindus in the world, 900 million of them are Indians.

St. Patrick’s Day was also celebrated on March 17th. This was originally a religious Irish holiday but is celebrated all over the world now.  A tradition is to wear something green otherwise you’ll get pinched! Why green? Nobody knows for sure. St. Patrick is one of Ireland’s patron saints who is thought to have been born in Great Britain, U.K.. He spent his later life in Ireland spreading word about the religion Christianity. He is believed to have died on March 17, over 1,500 years ago. The color of St. Patrick is originally believed to have been blue. However, the color green is associated with Ireland since the country has a very green landscape. At some point, the color associated with St. Patrick’s Day changed to green. Kids are told a story about the Leprechaun, a small old man with a hat and a pot of gold. St. Patrick’s Day is celebrated with parades, dancing, music, green things, and lots of food. 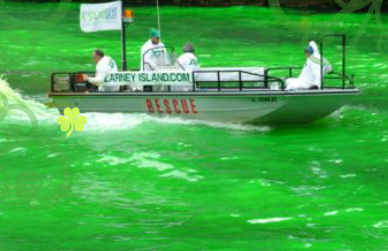 For over 40 years, the Chicago River in Chicago, USA has been dyed green as part of St. Patrick’s Day celebrations. This year, the river was colored green on March 15. Here are three videos. One is showing people celebrating Holi. The second video is about St. Patrick’s Day. The last video is of a flashmob (a group of people who suddenly come together in a public place and perform an act) at a train station in Australia doing an Irish dance. Some of the dancers are from the famous Irish dance company called Riverdance.

Having powdered color and water splashed at you is less painful than being hit by oranges. Earlier this month, the town of Ivrea in Italy held its annual orange fight called the Battle of the Oranges.