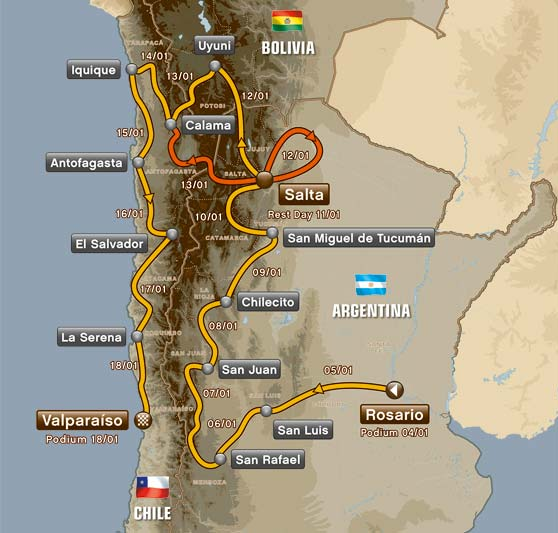 The 2014 Dakar Rally finished on January 18 with winners in four categories: Marc Coma from Spain in bikes, Nani Roma from Spain in cars, Andrey Karginov from Russia in trucks, and Ignacio Casale from Chile in quads (also known as all terrain vehicles – ATVs). The Dakar Rally is an annual long distance off-road race that takes place over two weeks. It started in 1978 and most of the races began in Paris, France, and ended in Dakar, Senegal.

In 2009, the race was moved to South America because of political instability in Africa. This year, the race started in Argentina, went through Bolivia, and ended in Chile. The Dakar Rally is a difficult and wild race – it goes over sand dunes, rocks, grass, rivers, mud, and can be quite dangerous. This year, the race started with about 430 vehicles, and ended with approximately 200. The race was around 9,000 kilometers (5,600 miles) long.

Here is a video showing some moments from the 2014 Dakar Rally.