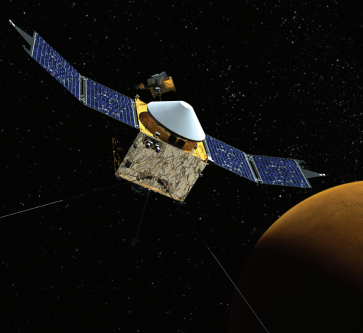 On November 18, the Mars Atmosphere and Volatile EvolutioN (MAVEN) took off from Earth and headed towards our neighbor Mars. MAVEN is the American space agency NASA’s spacecraft that will orbit Mars and study the atmosphere of the planet. The trip to Mars will take MAVEN about 10 months. Scientists believe that Mars once had flowing water on its surface. They want to understand what happened to the water and what changed the planet to the dry and cold planet we know today. The data MAVEN collects will help us understand the history of the atmosphere of Mars.

There are already 3 spacecrafts (Mars Odyssey, Mars Express Orbiter, and Mars Reconnaissance Orbiter) orbiting Mars and sending data back to Earth. There is another orbiter (Mars Orbiter Mission) launched earlier this month that is currently on its way to Mars. There are even two rovers (Curiosity and Opportunity) strolling around on Mars.

Here is a NASA site that gives a Mars and Earth comparison. Here are two videos explaining Maven and what ancient Mars could have looked like.

One Mars year (the time it takes Mars to orbit around the Sun) is 687 Earth days.