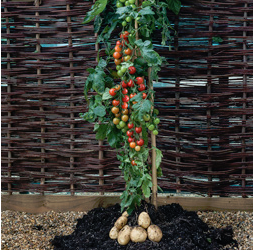 Thompson & Morgan, a company based in the United Kingdom that sells plants and seeds, has recently announced a new product called the TomTato. Can you guess from the name what type of plant the TomTato is? Well, it’s a plant that produces both tomatoes and potatoes! Cherry tomatoes are produced above the ground and white potatoes are produced below the ground. A technique called “grafting” was used to produce these plants. This technique joins tissues of two plants to create a single plant by taking the roots of one plant and joining it with the stem of another plant. These plants are available for sale in the United Kingdom. Here is a video about TomTato.