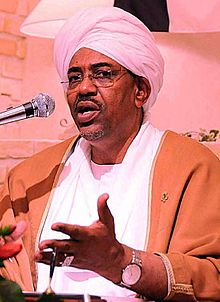 Many Sudanese have protested because fuel prices shot up in the country. The government used to spend money and help bring down the cost of fuel for its citizens. Recently it stopped doing that, which doubled the fuel prices, upsetting many people. Sudan and South Sudan used to be one country called Sudan until 2 years ago when they split up. Sudan used to be an oil-rich country. However, when South Sudan separated, it took with it 75% of Sudan’s oil. This loss has hurt the economy of Sudan, and the government can no longer spend the money to bring down fuel costs for its citizens.

Sudan’s capital is Khartoum and the Nile, one of the world’s longest rivers, flows through the country. Sudan is the world’s largest producer of gum Arabic (also known as gum acacia) – it’s gum used in sweets such as M&Ms. Here is a video showing gum Arabic production in Sudan.

Omar al-Bashir (see image), the president of Sudan, is wanted by the International Criminal Court on charges of having committed crimes against people in Sudan.