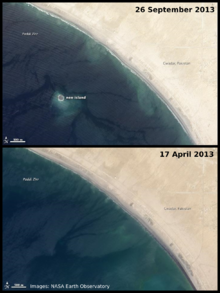 On September 24, a strong earthquake of magnitude 7.7 on the Richter scale struck south-western Pakistan killing over 500 people. The area is not very developed, and many homes are made out of mud bricks. The earthquake damaged and even flattened many homes. Over 100,000 people have been left homeless.

The shaking caused by the earthquake was felt in nearby countries such as India, Oman, and Iran. The magnitude of an earthquake is measured on the Richter scale, and is determined by how much the earth shakes. Usually, a magnitude of 6 and above is considered to be a strong earthquake.

The earthquake pushed up a little island in the Arabian Sea about a mile (2 km) from the coastline of southwestern Pakistan. Imagine looking out and suddenly seeing an island about the size of a football field come out of nowhere! Some local people got in boats and checked out the island.

An anagram for “the earthquakes” is “that queer shake”.

Earlier this year, Pakistanis set a Guinness World Record for planting the highest number of mangroves saplings (young trees) in a day. They planted 847,275 saplings. The previous record was set in India with 611,000 saplings planted in 2010.