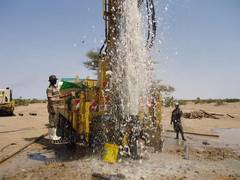 The United Nations and the Kenyan government announced that two large aquifers have been discovered in Kenya. An aquifer is an underground source of water. The discovery is big news for the country as parts of Kenya struggle with drought problems. According to the United Nations, about 40% of Kenya’s population doesn’t get clean water.

Part of the water we drink and use in our homes comes from the ground. This is called groundwater. Snow or rain falls on the ground. Some of this water is used by plants, some goes into rivers and lakes, and some keeps going down through the cracks in the soil, rock, or sand. Eventually, it gets to a zone called an aquifer, where water collects. A hole is drilled in the ground to the aquifer and a water pump is used to pump out the groundwater.

The aquifers in Kenya were discovered using satellite and other scientific instruments. A hole was drilled to confirm that water does exist (see image). The quality of the water is still being determined. If the water is okay for people to use, it would help many Kenyans who suffer because of lack of drinking water and water for crops. Here is a video showing the water cycle.

A water molecule is made up of two hydrogen (H) atoms and one oxygen (O) atom – that’s why the chemical formula for water is H2O.

Here is a joke:
TEACHER: Jack, what is the chemical formula for water?
JACK:  H I J K L M N O.
TEACHER: What are you talking about?
JACK: But that’s what you said yesterday – it’s H to O.