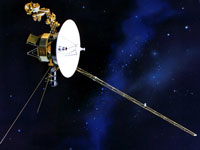 Voyager 1 is boldly going where no man or man-made object has gone before. NASA, the American space agency, recently confirmed that the spacecraft left our solar system in August 2012, and entered “interstellar space”.

What defines our solar system? It’s our sun, the eight planets that go around it, their moons, dwarf planets, comets, and everything else in space that orbits our sun. Our sun’s influence goes only so far, and beyond that is what is called interstellar space. This is the space between stars where the effects of the stars are not felt.

Voyager 1 left Earth in 1977. Its life was expected to be five years, but 36 years later, it’s still going strong! It has been zooming at a speed of about 38,000 miles per hour (60,000 km/h), and is 12 billion miles (19 billion km) from our sun. Voyager 1 is the farthest object that man has sent from Earth. It takes about 17 hours for a signal from Voyager 1 to reach one of the antennas here on Earth.

Well, how do we know that Voyager 1 is in interstellar space? Our sun gives off particles. These particles travel outward from the Sun at an extremely fast speed of about 1 million miles per hour (1.6 million km/h). Near the edge of our solar system, these particles start slowing down and begin to move sideways. It’s like our sun and the area our sun has an effect on are surrounded by a bubble of particles. This bubble defines our solar system. Beyond this bubble is interstellar space. After studying the particle data sent back from Voyager 1, scientists concluded that the spacecraft left our solar system in August 2012. Well, how soon do you think Voyager 1 will get close to another star? It turns out that it will be a bit of a wait – it will take about 40,000 years!

Voyager 1 is not alone out there. It has a twin called Voyager 2 which is about 9.5 billion miles (15 billion km) away from our sun. The two Voyager spacecrafts keep going and going and going!

You can watch a video about Voyager 1 here.

On Voyager 1, there is a 12 inch gold-plated phonograph record with images that portray people and life on Earth, natural sounds of birds, music from several countries, and greetings in 55 languages. There are also drawings on the record that show where Earth is. You can watch a video about it here.

“To boldly go where no man has gone before” is a quote from Star Trek television episodes and films. “Keep going and going and going” is a slogan from a Duracell Energizer advertisement. You can watch an ad here.