On September 11, hundreds of thousands of people gathered to form a 400 km (250 miles) long human chain that weaved through the towns of Catalonia, Spain. The Catalan people were expressing their desire for creating their own independent country.

Catalonia is a region in the north-eastern part of Spain. It borders France and Andorra in the north, and the Mediterranean Sea lies to its east. The capital of the region is Barcelona, Spain’s second largest city after its capital city, Madrid. The population of Catalonia is about 7.5 million.

Catalans want to separate from Spain, and have held other demonstrations as well. Catalonia generates a lot of money for Spain. However, the region doesn’t receive the benefits of making the large sums. In recent years, the government of Spain has been struggling with money problems, and Catalans find it unfair that they are paying for the Spanish government’s problems.  Another reason is that Catalans have their own language, customs, and traditions, and so they believe they should have their own nation. Some of the area’s official languages are Catalan, Spanish, and even a sign language called the Catalan Sign Language.

Spain is split into 17 autonomous regions (one being Catalonia) and 2 autonomous cities.  “Autonomous” means that each region is allowed to handle some of its own matters. September 11 is celebrated as the National Day of Catalonia. On this day in 1714, the Catalan troops lost a war to the army of Philip V, King of Spain, and Barcelona was forced to surrender. 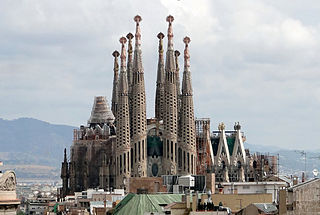 Catalans are not just good at building human chains, they also have a tradition of building human towers called “castells” (see image above). Catalonia is known for many things including the football club called FC Barcelona based in Barcelona. The famous soccer player Lionel Messi plays for this club. One of Catalonia’s most famous architects is Antoni Gaudí. His church called the Sagrada Família (see image) is a landmark of Barcelona and is a UNESCO World Heritage Site. Another very famous Catalan is Joan Miró, a painter and sculptor. Here is a video showing some of his artwork.

Some popular images associated with Spain are bullfighting (the sport), flamenco (the musical genre), paella (the rice dish), tapas (variety of appetizers), and Pablo Picasso (the painter).

One of the longest human chains was made on August 23, 1989 and was called the Baltic Way. Over a million people formed a 600 km (370 mile) long chain across an area that was part of the country of Soviet Union then. They were asking for their independence. Today, that area forms the countries of Estonia, Latvia, and Lithuania.

Many people around the globe associate September 11 with what happened in the United States on this day in 2001. A group called al-Qaeda staged attacks, killing thousands of people and destroying the famous World Trade Center in New York.  Americans write their date as month-day-year, so this day is remembered as 9-11. The public emergency telephone number in the US is 911.