Can you imagine some 20,000 people getting together to just throw tomatoes at each other? That’s exactly what happened in the town of Bunol in Spain on August 28. La Tomatina is a tomato fight festival that is held on the last Wednesday of August each year. It is probably the world’s largest food fight. 20,000 people sounds like a lot, but it’s only half as many as last year! This was the first time in the festival’s history that people had to pay money (10 euros) to take part. Many folks were upset with the festival’s organizers. However, it costs the city money to provide the tomatoes and for the cleanup. This year, over 130,000 kilos (almost 300,000 pounds) of tomatoes were thrown within the one hour that the fight lasted.

This festival creates quite a mess. The city of Bunol has been hosting this festival for over 60 years, and has gotten pretty smart about it. Before the fight, the citizens of Bunol wrap up buildings with plastic, and after the fight, they hose down the town. However, it wasn’t always like this. After the first few years of the tomato fights, the city actually banned them. People who still threw tomatoes were put in jail. In 1957, the citizens of Bunol held “the tomato funeral” – they marched through town carrying a coffin with a single tomato inside. The city finally agreed to allow the fights, and later even started providing the tomatoes for the fights. The festival has become so popular that there are “La Tomatina” festivals held in other countries as well such as the United States, Chile, Colombia, and China.

You can watch a video from a previous year’s festival here. 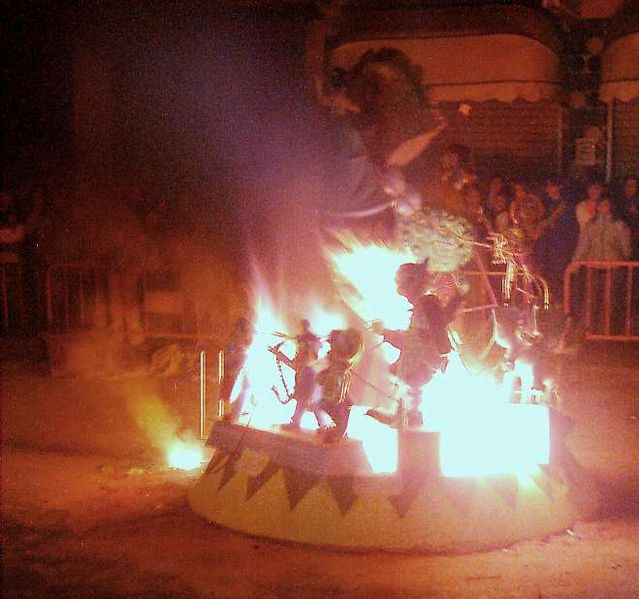 Spain has some very unique festivals. Hundreds of people run in front of bulls every morning during the 8 days of the San Fermín festival. Another festival is Las Fallas. Huge models (sometimes of famous people) are created out of paper mache and wood. These models are paraded during the festival and eventually burned (see image). People dress up in military costumes and throw flour and eggs at each other during the Els Enfarinats festival.

The town of Ivrea in Italy has an annual orange fight.