Prime Minister George Papandreou, the leader of Greece, resigned from his post, and a few days later, Prime Minister Silvio Berlusconi, the leader of Italy, resigned as well. Both Greece and Italy have been struggling with money problems, and their respective leaders, Papandreou and Berlusconi, lost popularity. New prime ministers have been selected in both the countries, and they will lead the countries until elections are held.

Italy, Greece, and some other European nations that use the currency “euro” have run into money problems since last year. The governments of some of these countries spent more money than they were making, and they kept borrowing money to make up the gap. 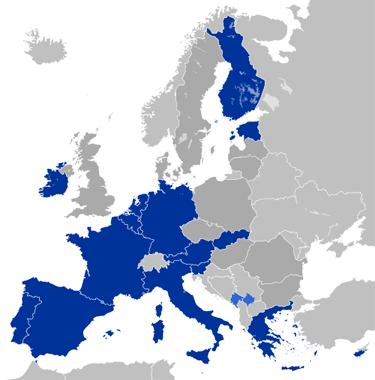 As a result, these countries accumulated a big debt. Last year, Greece could not pay back its loans that were due. This reduced the value of its currency. However, Greece shares its currency, the euro (sign: €), with 16 other European Union (EU) countries and a few non-EU countries. Therefore, Greece’s problems hurt all these countries as well. The 17 EU countries that use euro as their currency are referred to as the “euro zone”.

The situation became worse because it turned out that Greece was not the only euro zone country with a large debt. Italy, Ireland, and Portugal also had big debts. The EU along with the International Monetary Fund (IMF) came up with money to loan to the struggling euro zone countries. In return, these countries were expected to reduce their spending. Portugal, Ireland, and Greece have all received financial help since last year. In return, these countries have cut jobs, increased taxes, reduced salaries, and much more. The reduction in spending hurts the citizens of the countries. People are out of jobs and have much less money. Citizens of these countries have been upset with their governments and have protested. The prime ministers of both Portugal and Ireland stepped down earlier this year because they lost support within their nations. Italy has not received financial help yet, but it has a big debt.

Both George Papandreou’s father and grandfather were also prime ministers of Greece! Silvio Berlusconi is not only a politician, but also a song writer and signer. His new album called “Il Vero Amore” (True Love) is expected to be released soon.