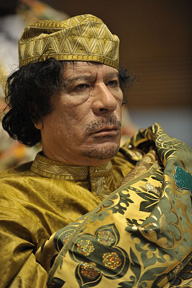 There is fighting going on in Tripoli, the capital of Libya, between the troops of the leader of Libya, Colonel Muammar Gaddafi, and some rebel groups. The rebel groups have taken over Gaddafi’s home compound in the capital city. It is unclear if Gaddafi is still in Tripoli or not.

Gaddafi has been the leader of Libya for almost 42 years. He has been a very strict leader. Many people in the country have been unhappy with his rule. In February this year, people started protesting peacefully in Libya, demanding that Gaddafi step down. Gaddafi’s troops started attacking the protesters. Groups of people, referred to as the “rebel groups”, started fighting back. Many Libyan citizens were killed by Gaddafi’s troops. In March, the United Nations Security Council agreed to help protect Libyan citizens. The United States, United Kingdom, France, and a few other countries joined forces and started attacking the Libyan government’s air force, tanks, and military centres. The rebel groups had gotten control of many cities in Libya, but Tripoli was under Gaddafi’s control until recently. His troops have continued to attack and kill Libyan citizens. In June, the International Criminal Court (ICC) put out an arrest warrant for Gaddafi.

Libya got its independence in 1951, after 40 years of occupation by Italy. King Idris I ruled the country until Gaddafi forced him out in 1969. Islam is the official religion and Arabic is the official language of Libya. About 90% of Libya is a desert – the Sahara desert runs through the country. One of the hottest places on Earth is a city in Libya. In 1922, El Azizia  recorded the hottest temperature ever measured on Earth – 136 degrees Fahrenheit (57.8 Celsius) – that is HOT! Libya is the only country that has a flag with just one color – green.