A newspaper called News of the World, owned by News Corporation, is all over the news! The reason is that journalists working for the paper were sometimes breaking the law to get their stories. News of the World was a very popular newspaper sold in the United Kingdom. It was known for digging up personal information about movie stars, politicians, singers, sports stars, and the royal family. However, while trying to get this information, some journalists were listening to the voicemail messages of some of these celebrities without their permission. This is against the law in the UK. Rebekah Brooks, the head of News of the World, was arrested. The paper also shut down, printing its last edition on July 10, after being in business for 168 years! 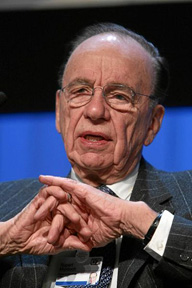 News Corporation, which owned News of the World, is the world’s second largest media conglomerate. A media conglomerate is an organization that owns a large number of media companies. News Corporation fully or partly owns newspapers like The Wall Street Journal, the 20th Century Fox film studio (which made hits like Star Wars and Avatar), TV channels such as National Geographic, Internet sites like Hulu, and much more!

The head of News Corporation is Rupert Murdoch. He is considered to be one of the world’s most influential and powerful people, and also one of the richest. He was questioned by British lawmakers about whether he was aware of the illegal activities at News of the World. He said he was not. One of the protesters who came to listen to his questioning tried to throw a pie on his face, but missed. Murdoch might not have enjoyed the taste of the pie – it was made of shaving cream!