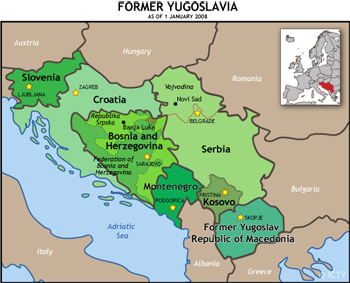 One of the world’s most “wanted men” got caught on May 26 in a village about 50 miles (80 km) from Belgrade, the capital city of Serbia. The world has been looking for Ratko Mladic for almost 16 years. Mladic was the leader of the Bosnian Serb army and is guilty of hurting many people during the 1992-95 war in Bosnia and Herzegovina (that’s just one country, not two!). He is now 69 years old, and was going out for a walk when he was caught.

You may have heard of a country called Yugoslavia. In 1991, Yugoslavia started splitting up into different countries. Slovenia, Croatia, and Macedonia were the first to break away. In 1992, Bosnia and Herzegovina broke away. What remained of Yugoslavia became two countries in 2006 – Serbia and Montenegro. In 2008, a part of Serbia called Kosovo split and formed its own country. (Now let’s see if you were paying attention – how many countries did Yugoslavia finally break into?)

Going back to Bosnia and Herzegovina, there were three main groups of people living there – the Bosnian Muslims (who wanted an independent country), the Bosnian Serbs (who wanted to stay with Yugoslavia and create a greater Serbian state), and the Bosnian Croats (who wanted to join Croatia). A war broke out in Bosnia and Herzegovina amongst these three groups which lasted for 3 years. One of the worst crimes committed during this war was in a city called Srebrenica, where troops led by Mladic killed thousands of Bosnian Muslims. 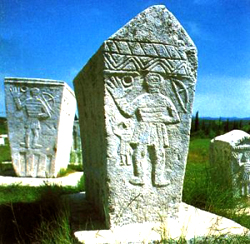 Mladic has been taken to The Hague, a city in the Netherlands, where the United Nations, an international peace organization, has a court. This court deals with people who commit crimes during wars. There is another person being tried at The Hague for crimes committed during the same war. His name is Radovan Karadzic, and he was caught three years ago in Belgrade. Karadzic was the leader of the Bosnian Serbs during the war.

Bosnia and Herzegovina’s capital is Sarajevo. There are about 60,000 tombstones called stećak found throughout the country. They were built between the 12th and 16th centuries and were usually made out of a single large block of stone.