The South China Sea borders multiple countries. Well, which country owns what part of the Sea? There is an international law defined by the United Nations Convention on Law of the Sea that says that countries own a 200 mile (320km) zone around their coasts. Not all countries agree with this Law. China, the Philippines, Brunei, Malaysia, and Vietnam all border the South China Sea and have overlapping areas of the water body they claim as theirs. Owning a larger part of the water body can make a country richer. It is expected that the seabed contains oil, minerals, and natural gas. The waters also have fish which is a valuable resource. In addition, there are important shipping routes through the South China Sea. The disagreements are not just about the “water body” but also about some islands in the South China Sea that multiple countries claim as their own.

The South China Sea is not the only water body that countries are arguing about. There are ongoing disagreements about the Arctic Ocean, Aegean Sea, Caribbean Sea, Caspian Sea, and more. Just recently, one disagreement was resolved. Russia and Norway agreed on how to split up an area of Barents Sea that they had argued about for many years. 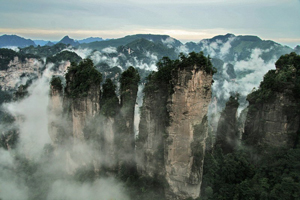 Vietnam’s capital is Hanoi. The country at its narrowest point is about 50 km (30 miles) wide. One very unique place to visit in Vietnam is the Ha Long Bay. The Bay has over a thousand islets (very small islands) with pillar like stone formations.

China’s capital is Beijing. One of China’s national parks, Zhangjiajie National Forest Park, is famous for its pillar like stone structures. Some people say that the look of the “Hallelujah Mountains” in the film Avatar was inspired by this park.