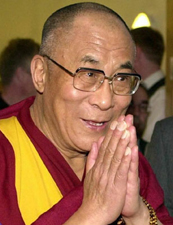 Over the centuries, Tibet has sometimes been an independent country and sometimes been a part of China. Most recently, Tibet became independent at the start of the twentieth century (around 1912) but was taken under Chinese control again in 1950. In March 1959, the Dalai Lama fled to Dharamsala with thousands of his followers and has been living there ever since. The Dalai Lama has been fighting peacefully for his people’s rights, for which he was awarded the Nobel Peace Prize in 1989. He wants Tibet to have a certain amount of self-rule while still being part of China, but the Chinese government does not want Tibet to have any special status.

The Dalai Lama, Tenzin Gyatso, is the 14th in the line of Dalai Lamas that goes back over 600 years. “Dalai Lama” means “teacher whose wisdom is great as the ocean”. Tibetan Buddhists believe that after a Dalai Lama dies, he is reborn so that he can continue his work to help and guide people. After a Dalai Lama dies, the search begins to find the child that is his reincarnation (meaning the child that he is reborn as). This can take a few years. One of the tests done to choose the child is to give different things to the child and see if he selects those that belonged to the previous Dalai Lama. The current Dalai Lama took on the role as the leader of the Tibetans at the age of 15. He is now 75 years old and wants a leader elected by the Tibetan people to continue to fight for the rights of his people.

Tibet is called the “roof of the world”. It is at a height taller than the European Alps, and its area is bigger than France, Greece, and Italy put together. That’s one big “roof”!