Many people – the rich and the poor, Christians and Muslims, the young and the old – have been protesting in Egypt for over two weeks. They are demanding that the country’s president should step down. Many have used social networking websites, such as Facebook and Twitter, to urge other people to join the protests.

Hosni Mubarak has been the president of Egypt for almost 30 years, and was vice-president for 6 years before that. He is 82 years old. The people of Egypt have been dissatisfied with the way Mubarak and his government have been running the country. There aren’t enough jobs for people. Food and housing prices are very high. Many people in the country are poor.

The government tried to control the protests by disabling the Internet, and by not allowing people on the streets at certain times. But these steps did not work, and the protests increased. Mubarak has said that he will step down from his role as president when the next elections are held later this year. 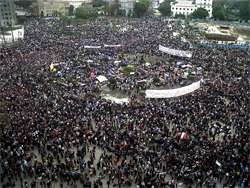 He has replaced some of the ministers in his government. He has also nominated a vice-president for the first time (the post of vice-president had been vacant since he took over as president). The people protesting are not satisfied by all this, and they want Mubarak to step down right away. The protesters have been very united. In Cairo, thousands have parked themselves in a downtown area called the Tahrir Square. People are bringing food and blankets for the protesters. Many people formed human chains around museums to stop looters from stealing Egyptian treasures.

There are many things that come to mind when you hear “Egypt” – the pyramids, mummies, the Great Sphinx of Giza, papyrus paper, the Nile (the longest river in the world), and much more.