North and South Korea were part of a single country called Korea for over four thousand years. In 1910, the Japanese occupied Korea and ruled it until the Second World War. When the war ended in 1945, the Japanese had to give up control of Korea. Korea was then occupied by the Soviet Union in the north and the United States in the south. A line in the middle (called the 38th Parallel) was drawn and two countries were created in 1948 – North Korea and South Korea. North Korea attacked South Korea in 1950, starting the three year Korean war. After the war, the border between North and South Korea became the most guarded border in the world, and the two countries have evolved very differently from each other. 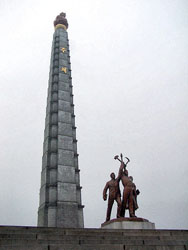 The North Korean government is very strict and controls many aspects of its citizens’ lives. It is very difficult to visit North Korea and for its citizens to leave. People don’t have access to many gadgets and conveniences. North Korea has nuclear technology (that can be used to create bombs) which has been a concern for many countries around the world in recent years. The country has been led by people from the same family since it was founded. Kim Il-sung was the leader from 1948 till he died in 1994. His son, Kim Jong-il, has been the leader since. Many believe that he has already selected one of his sons to be the next leader of North Korea. There isn’t much communication between North Korea and most of the world. The Juche Tower is a famous landmark of North Korea.

South Korea is democratic. The citizens of the country have a very high standard of living, and South Koreans are one of the world’s most hi-tech people.