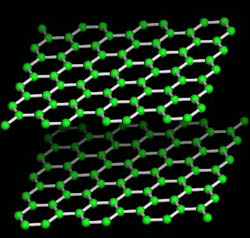 The 2010 Nobel Prizes were awarded to 11 individuals. The Nobel Prize is an international award that is given every year to individuals who have made a discovery that significantly impacts mankind. The awards are given in the fields of Physiology or Medicine, Chemistry, Physics, Economics, Literature, and Peace. It is the highest honor an individual can receive in each of these fields. The Nobel Prize was started in 1901.

The Nobel Prize in Physics went to two scientists Andre Geim and Konstantin Novoselov (both born in Russia) for their work in isolating a material called graphene just 6 years ago. All of us are familiar with a material called graphite – that is what is in the lead of a pencil. Well, graphite consists of layers upon layers of graphene stacked on top of one another. The material graphene is exciting because it has properties that might enable us to have faster and smaller computers and better touch screens and solar cells. The image shows 2 graphene layers.

Liu Xiaobo won the Nobel Peace Prize for his non-violent fight for human rights in China. Xiaobo is a Chinese writer and human rights activist. He wants China to be a multi-party democracy, and to respect human rights. He was sent to jail in China last year for 11 years for his involvement in pushing his ideas. He still is in jail.

The Nobel Prize in Chemistry went to three scientists Richard F. Heck (born in USA), Ei-ichi Negishi (born in China), and Akira Suzuki (born in Japan). Carbon is an element that is found all over nature – in coal, in diamonds, and even in the lead in our pencils (graphene, which we just learnt about, is also made of carbon). But scientists did not have an easy way of getting carbon atoms to ‘bond’ with each other to make new materials, until the work of the Chemistry Prize winners about 30 years ago. Their work has made it possible for other researchers to create new medicines, new agricultural products, and many more things.

Mario Vargas Llosa (born in Peru) won the 2010 Nobel Prize in literature. He has written more than 30 novels and essays in Spanish that have been translated into over 30 languages. His writings include comedies, thrillers, mysteries, and also news articles. He even ran for the post of president of Peru, but did not win. Some of his famous books are The Time of the Hero, Conversation in the Cathedral, and Aunt Julia and the Scriptwriter.

The Nobel Prize in Medicine went to Robert Edwards (born in UK) for his work in developing IVF (in vitro fertilization). Some people are unable to become parents because of medical problems. IVF is a way that allows many of them to still have a baby. There have been around four million babies born in this world using this medical technique.

Peter Diamond (born in USA), Dale Mortensen (born in USA), and Christopher Pissarides (born in Cyprus) won the Nobel Prize for Economics. They have helped explain the behavior of “search” markets. These are markets where several people may be searching for something like a job or a house, and might not find one even when there are several jobs or houses available. The Nobel Prize winners helped create models for such markets, which enable governments to come up with better rules and policies for higher employment and more home sales, for example.