Libya and Switzerland have not been getting along these last couple of years. It all started in 2008 when the son and daughter-in-law of Libya’s leader, Muammar Gaddafi, were arrested in Switzerland for mistreating some people. They were released in a couple of days, but Gaddafi has since shut down Swiss companies in Libya, canceled flights between the two countries, taken Libya’s money out of Swiss banks, and stopped trade between the two countries.

The Swiss president made a trip to Libya last year and apologized for the arrest of Gaddafi’s son, but that didn’t really help the situation.  In November last year, Switzerland passed a ban on constructing new minarets in the country. A minaret is a tall tower of a mosque, a place of worship for people who follow the religion of Islam. A few weeks ago, Libya, a country whose official religion is Islam, said that Switzerland is attacking its religion, and all Muslims (people who follow Islam) around the world should end their relationship with Switzerland. 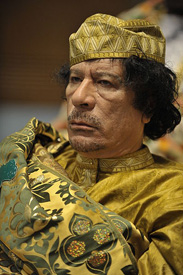 Before this spate started, Libya and Switzerland were on friendly terms and have been trading partners for many years. Switzerland provided Libya with watches, medicines, and other goods, while Libya provided Switzerland with crude oil. Libya is the only country that has a flag with just one color – green. Green is the color associated with Islam. Switzerland is known for its neutrality – it doesn’t take sides with any country when there is a conflict. It has not been at war with anyone for almost 200 years.