After 15 months of not talking to each other, the Dalai Lama’s team met with the Chinese government. They met to discuss their issues about Tibet. The Dalai Lama is the political and spiritual leader of the Tibetans – people from an area called Tibet, which is a part of China.

The history between Tibet and China goes way back. Around 700AD, Tibet was an independent kingdom. Over the centuries, Tibet has sometimes been an independent country and sometimes been a part of China. Most recently, Tibet became independent at the start of the twentieth century (around 1912) but was taken under Chinese control again in 1950. A few years after that, the Dalai Lama fled to India with several of his followers and has been living there ever since. The Dalai Lama has been fighting peacefully for his people’s rights. He wants Tibet to have a certain amount of independence even if it is part of China, but the Chinese government does not want Tibet to have any special status. Over the last few years, the two sides have met several times, but no solution has yet emerged.

Tibet is a geographic wonder. Imagine 5 million people living at a height taller than the European Alps over an area bigger than France, Greece, and Italy put together! Tibet is called the “roof of the world”. Tibet is so high that the oxygen level in the air is low enough to create breathing problems for many people who visit the area. In fact, there is a train service that runs to Tibet from other parts of China, 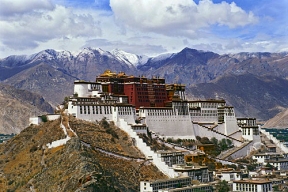 and oxygen is pumped into the train’s cabins to help passengers deal with the lower amount of oxygen in the air. The train service to Tibet is the world’s highest railway. Tibet also has the world’s highest airport – Bamda Airport is over 4300 metres (over 14,000 feet) high.

Potala Palace in Tibet is a 13-storey building and was the home of the Dalai Lama until the 1950s. It was built over 350 years ago, and was once amongst the world’s tallest buildings.