On September 14, Norway had elections to choose its next government. The coalition made up of the three political parties – Labor, Center, and Socialist Left – narrowly won the elections. A coalition is when multiple political parties work together as one party. The leader of this coalition is the current Prime Minister Jens Stoltenberg, who will now most likely remain in office for another term of four years.

Norway has a head of the country and a head of the government. The head of the country is a King, Harald V. The head of the government is the Prime Minister. Norway was part of a union with Sweden, and separated from this union to become an  independent country in 1905. Norway is a scenic country of mountains and glaciers and lakes. It is also known for something called fjords – a fjord is a narrow area of water coming inland between steep hill sides caused by the movement of glaciers. The longest fjord in Norway is over 200 km (125 miles) long! 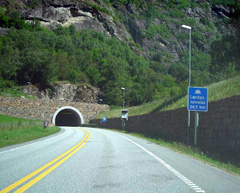 A very famous Norwegian is Roald Amundsen, an explorer who was the first person to reach the South Pole in 1911. It is believed that he died in a plane crash over the Arctic Ocean in 1928. Just last month, the Norwegian navy started a hunt for the wreckage of Amundsen’s plane using very hi-tech underwater robot vehicles, but did not find anything.