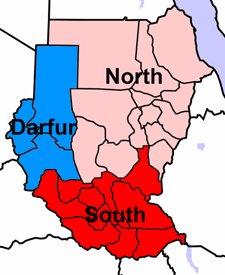 On July 22, an international court in The Hague, a city in The Netherlands, recommended a change in the boundary between North and South Sudan. The two sides have accepted the court’s decision, which redraws the boundary of the Abyei region to give the North more land with oil.

But wait a minute, isn’t Sudan just one country? It is indeed – in fact, it is the biggest country in Africa, almost ten times the size of the United Kingdom! To understand what’s going on, we need to take a step back in history. Sudan got its independence from the United Kingdom in 1956. But in its 53 years of freedom, it has only had 11 years without a war.

Sudan is a land with many religions and ethnic groups. The people in the South are mainly black Africans, many of whom are Christians. The majority of people in the North are Arabs of the Islamic faith. For a while, the government was dominated by the people from the North, and they tried to impose Islamic law in the whole of Sudan. The people living in the south rebelled and a war broke out that lasted for over 20 years and killed more than 1 million people. This war came to an end in 2005 and a power sharing deal was made.  The President of Sudan is from the North, and the Vice President is from the South. Also, the South has some amount of self-governing, and in 2011, it will be decided if South Sudan is to be a separate country.

In 2003, another war started in Sudan between North and West Sudan. The people in West Sudan, the Darfur region, are of the Islamic faith but are black Africans. They felt that they were unfairly treated by the Arabs. This war is still going on.

The International Criminal Court in The Hague put out an arrest warrant for Sudan’s President, Omar al-Bashir, in March this year. He has been charged for committing crimes against people in Darfur. The President refuses to turn himself in.

Sudan’s capital is Khartoum and the Nile, one of the world’s longest rivers, flows through the country.  Sudan is the world’s single largest producer of gum arabic (also known as gum acacia) – it’s gum used in sweets such as M&Ms.