Really early in the morning on June 28, the Honduran army barged into the home of the President, Manuel Zelaya, took him in his pyjamas, put him on a plane, and sent him off to another country. They brought in a new interim President.

What upset the army to have thrown their President out of their country? Zelaya was going to have Hondurans vote on June 28 to see if they would support making changes to the constitution. Many people believe that this was his way of trying to stand for president for another term. The current Honduran constitution allows a person to be a president for just one 4-year term, and elections to choose the next president are in November this year. The army, the Supreme Court, and the other political parties in Honduras all told Zelaya to not have such a vote, but Zelaya ignored them. Before Hondurans could vote, the President was forced out of the country. On July 5, Zelaya got on a plane and decided to return to his country. The army blocked the runway, and the plane could not land in Honduras. Finally on July 9, Zelaya and the interim President started a conversation on how to resolve the issues.

Christopher Columbus, a famous explorer, landed in Honduras in 1502, and Honduras became a Spanish colony for about 300 years until 1821. Honduras is a land of mountains, forests, birds, orchids, bananas, and coffee. Its capital is Tegucigalpa. Most Hondurans are “mestizo”, which means that their ancestors are a mix of native Americans and Europeans. Football (soccer) is the most popular sport. In fact, the game even led to a war! Honduras was playing against El Salvador to qualify for the 1970 FIFA World Cup, when fans insulted and harassed each other’s teams. 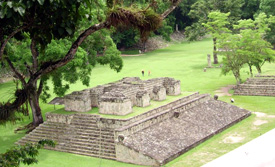 The tension between the two countries, which was already high, was further increased, and a four day war broke out between them!

The Mayans lived in Honduras from about 300 to 900 A.D. Copan, a city in Honduras, is believed to have been an important Mayan town. Many ruins have been found there, and the most impressive is the Hieroglyphic Stairway, which is around 70 steps with carvings of symbols.