The G-20 summit was held in London, the capital of the United Kingdom, on April 2. World leaders from some of the largest economies and some international organizations got together to discuss how to solve our world’s current economic problems. The group decided that US$750 billion will be given to the International Monetary Fund, an organization that helps countries with financial problems, US$250 billion will be used to help increase global trade, and US$100 billion will be given to some of the poorer countries as extra aid. That’s a total of US$1.1 trillion (a trillion is 1 followed by 9 zeros)! The decisions made at the G-20 summit certainly made many folks around the globe more confident about our economy since the stock market shot up in many countries.

G-20 sounds like the name of a robot from a sci-fi movie, but it simply stands for “Group of 20”. So who’s in the group? It is basically the heads of banks and finance ministers from 19 countries (Argentina, Australia, Brazil, Canada, China, France, Germany, India, Indonesia, Italy, Japan, Mexico, Russia, Saudi Arabia, South Africa, South Korea, Turkey, the United Kingdom, and the United States) and the European Union. The G-20 was formed in 1999 after a financial crisis so that various countries could get together and discuss the world’s economic issues and their solutions. 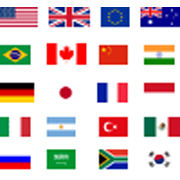 The nations in this group represent two-thirds of the world’s population and 85% of all the goods and services produced in the world.

There are a few other “G”s out there. There is the G-8, a group of leaders from eight powerful countries around the globe – it actually started as the G-6! And then there is the G-77, a group of developing countries which did start with 77 members, but now has 130! It decided to stick with its original name though, which was very wise – otherwise it would have been changing its name every few months!