On March 15, Mauricio Funes won the elections to become the next president of El Salvador. In El Salvador, a president is elected for a five year term and a person needs more than 50% of the votes to win a presidential election – Funes had 51%! Funes belongs to a party called FMLN (Farabundo Marti National Liberation Front) – his election brings an end to twenty years of rule by another party called Arena.

El Salvador is the smallest and most densely populated country in Central America. It was ruled by the Spanish for almost 300 years, until 1821. El Salvador’s history has been marked by many wars, including one that broke out after a soccer match! El Salvador was playing against Honduras to qualify for the 1970 FIFA World Cup, when fans insulted and harassed each other’s teams. The tension between the two countries, which was already high, was further increased, and a four day war broke out between them! El Salvador also had a 12 year civil war in which more than 75,000 people were killed – this saw the rise of the FMLN party. 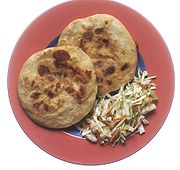 Under Spanish rule, El Salvador’s economy was completely dependent on exporting indigo – a blue dye that was used for clothes, and was what gave jeans their original blue color. But after artificial dyes were invented, El Salvador quickly moved to coffee as the main export to support their economy.

Most Salvadorans are “mestizo”, which means that their ancestors are a mix of native Americans and Europeans. One of the most popular dishes in El Salvador is the pupusa, a hand-made stuffed corn bread.