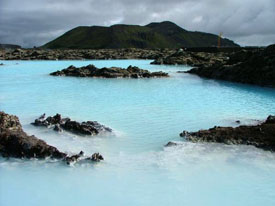 On Feb 1, Iceland found a new head for the country, Johanna Sigurdardottir – the first female prime minister of Iceland. The last few months have been quite eventful for Iceland – its economy crashed last October, and its government resigned this January. But until recently, Iceland was often listed as one of the happiest countries in the world. So what happened?

Just a year ago, things were going great in Iceland. People from all over the world were putting their money in Icelandic banks, which helped Iceland’s economy a lot. This was because Icelandic banks were offering high interest rates. When we put money in a bank, the bank gives us back a bit more than we put in. For example, if we put $100 in the bank for one year, the bank might pay us an interest rate of 5%, which means that a year later we’ll have $105. Now banks can do this because they take our money and loan it to other people, and charge them an even higher interest rate. For example, the bank might take $90 from the $100 we gave it, and loan it to John who needs the money to build his home. But the bank charges him 10% interest, which means that John has to return an extra $9 (which is 10% of $90). Then the bank can pay us the extra $5, and keep $4 as its profit.

But what happens if John is unable to pay the extra 10% he was supposed to? Or worse, what if he can’t even return the $90 that he borrowed? What does the bank do when we show up to get our $105? They can’t pay us! That’s exactly what happened last year. As the global economy got hit, many people did not pay back their loans. The Icelandic banks had no money left to give back to people who had saved their money with them. The government had to take over the banks, but the total amount owed by Iceland’s banks was more than six times the value of what the whole country produces each year! Many people lost their jobs, the value of homes went down, and the value of Iceland’s currency went down. That just made it harder on the people of Iceland, since it meant that the cost of most things went up. The Icelanders blamed the government, which then resigned in January this year.

Iceland is an island country known as the land of fire and ice. It has the name because it is home to many glaciers, volcanoes, geysers, and hot springs. The island is filled with thermal swimming pools, which are heated naturally by underground volcanic activity. One of the most famous and most photographed pools in Iceland is The Blue Lagoon. The capital is Reykjavik, the world’s most northerly capital. Iceland is one of the most sparsely populated countries in the world with just a little over 300,000 people (that’s about 1/6th the population of Paris)!