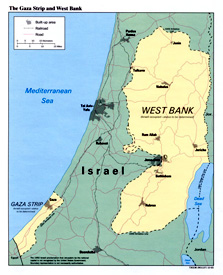 On Dec 27, Israel launched a massive attack against a group called Hamas in Gaza Strip because Hamas was firing rockets at Israel. The attacks have now been going on for almost two weeks, and many people have been killed and wounded.

For centuries, Jews and Palestinians have both lived in the same geographical region (today the country is called Israel and used to be called Palestine). Since that region is “home” for both sets of people, they have strong disagreements about who should get to live where. In 1947, the United Nations, an international peace organization, proposed splitting the country into two regions – one for the Jews and one for the Palestinians. Unfortunately, they didn’t agree, and fighting broke out. By the time the initial fighting was over, the Jewish people had created a country called Israel (in 1948). A large percentage of the Palestinian people fled to neighboring countries (Lebanon, Syria, Jordan, and Egypt). Today, most of the Palestinians live in two separate regions – the Gaza Strip and the West Bank, both of which are next to Israel. But the fighting and disagreements between the two haven’t really stopped, and various attempts at peace have failed in the past.

To make things even more complicated, the Gaza Strip and the West Bank are currently controlled by different groups of Palestinians. A group called Hamas controls Gaza Strip, and a group called Fatah controls the West Bank. The Gaza Strip is a small piece of land (400 square km – a quarter the size of London, UK) along the Mediterranean Sea between Israel and Egypt. One of the main problems of the people living in Gaza Strip is that Israel controls most of Gaza Strip’s borders, and Israel has put a blockade on what and who can go into the area or come out. One of Israel’s main problems is that Hamas, the group that controls Gaza Strip, keeps firing rockets into Israel which hurt its citizens and towns. In June of last year, Hamas and Israel agreed on a truce – Hamas won’t launch rocket attacks on Israel, and Israel will remove some of the blockades it has put on Gaza Strip. Neither side completely stuck to their end of the deal, and the truce ended in December.

Some of the world’s oldest cities that have continuously been inhabited for thousands of years are in this region – Hebron and Jericho in the West Bank and Jerusalem in Israel.